I was at home, looking for something to do and browsing the internet like I do for cool stuff (like Der Drachenstich), when I came across Vivid Sydney, which looked spectacular. Vivid Sydney, for those of you who don’t know, is an epic large scale art and projection festival in which all of the landmarks in Sydney Harbour as well as select locations in the business district are  drenched in gorgeous digital projections of art, be they stills or video and animation, along with live entertainment and undoubtedly lots of incredible food and drink. It is by all accounts, stunning.

Unfortunately, I had missed the dates for Vivid Sydney, so I kept looking.

I then discovered a digital projection arts festival was taking place down in Melbourne later that summer (Australia’s winter) in Melbourne, called the Gertrude Street Projection Festival, and I had not missed that, and so I proceeded to book my plane tickets and hotels, and rental cars. Of course, I made a point to visit Sydney as well while I was down there, but that’s a separate post.

The Gertrude Street Projection Festival is an indie arts festival that activates Gertrude Street in Fitzroy, Melbourne, Victoria (I think I have that geographical taxonomy correct) between Smith Street and Nicholson Street, where Gertrude Street comes to an end at the Melbourne Museum. Whereas Vivid Sydney is a corporatized event designed to bring tourism to Australia, the Gertrude Street Projection Festival is an art festival for artists. You could argue that it is a great art show that spans a couple of city blocks so to speak, as I was probably the only tourist there, and surprised a couple of staffers who asked me why I was there. The questions were not hostile or guarded, rather curious that a foreigner such as myself would have ever come across the event to begin with.

As is likely the case with Vivid Sydney, the photos on the GSPF’s site were punched up in Adobe Lightroom, which is fine and didn’t bother me, and as they didn’t have corporate sponsors footing the bill for $500,000 Christie Projectors to light up the sides of buildings, I was totally happy with what I was able to see on the few tall buildings Gertrude Street afforded. Apart from that though, the rest of the street had a broad array of styles of art that conveyed authenticity while also sticking to the themes of color, light, motion, and projection. There were even some digital interactive installations as well, although these were limited due the record inclement weather Australia received in 2015. 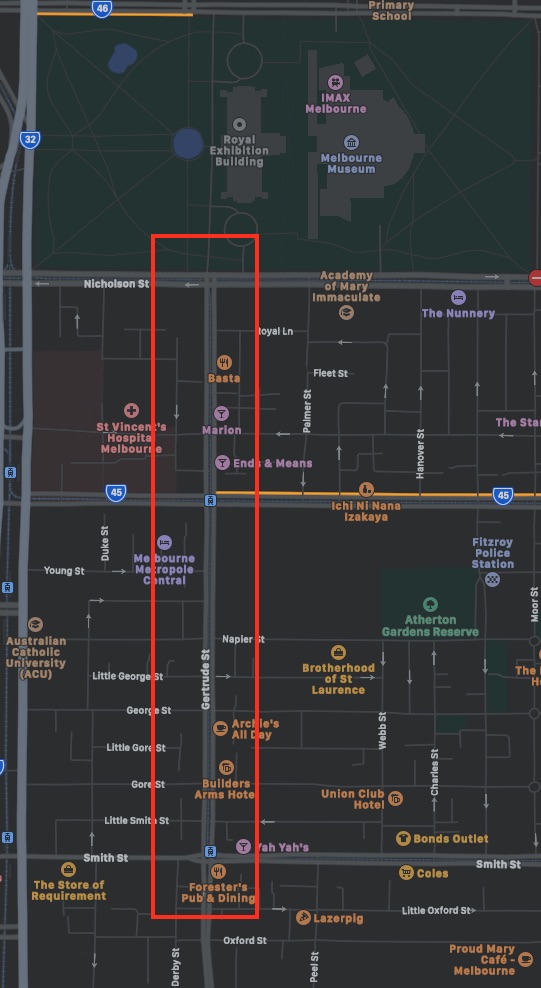 I particularly enjoyed the fact that many of the installations were installed in such a way that they happened to be where they were. This meant you had to be vigilant and aware to take everything in, with some projections being in alleyways that you might not otherwise notice. If you got too cold, you could duck in to a gallery, some temporary and others permanent, and experience art that would not hold up to the elements.

One thing worth noting about Melbourne, is that it has reached peak hipster, with everyone wearing Herschel Supply Co. backpacks, wing tip brogues, and suspenders. They’re everywhere.

At the end of Gertrude Street was the festival’s hub, The Catfish, a dive bar that was absolutely great. In fact, I can say that Australian dive bars are some of the best dive bars I’ve been to. Perfectly sized, incredible ambiance, great acoustics (and bands performing) and one of the best draughts I’ve ever had: Epic Hop Zombie from Epic Brewing, a New Zealand-based brewery.

The festival has continued to grow since I went, and has only gotten better. While it may gain underwriters and sponsors in a fashion similar to Vivid Sydney, I believe it will continue to possess an artistic authenticity that Vivid Sydney does not possess by design, and so I highly recommend that you go check it out.

But I haven’t experienced Vivid Sydney yet, so when I go back, I’ll have to check it out.

Below are some additional images and a video walking the length of the GSPF.

Previous
Next
Scroll to Top
We use cookies to ensure that we give you the best experience on our website. If you continue to use this site we will assume that you are happy with it.OkDeclineRead more