It’s not uncommon for theme parks that leverage movie properties to create replicas of items to put in theme parks. Often artifacts from summer blockbusters and tentpole films are too intrinsically valuable to a franchise to sacrifice to the wear and tear of theme park display.

This Ford Explorer, however,  from the 1993 film Jurassic Park bucks that trend, and appears to be the real deal.
Installed in Universal Orlando’s Islands of Adventure theme park roughly 18 years ago (accounting for construction and soft opening), it has undergone a couple of rehabs in its time.
In its early days, it retained the original curved bubble roof and its side windows were still transparent and likely still glass. The side windows were later converted to plexiglass and painted black on the inside to discourage people from both peering in the vehicle, and smashing the glass to take home a souvenir from the film, because people suck. 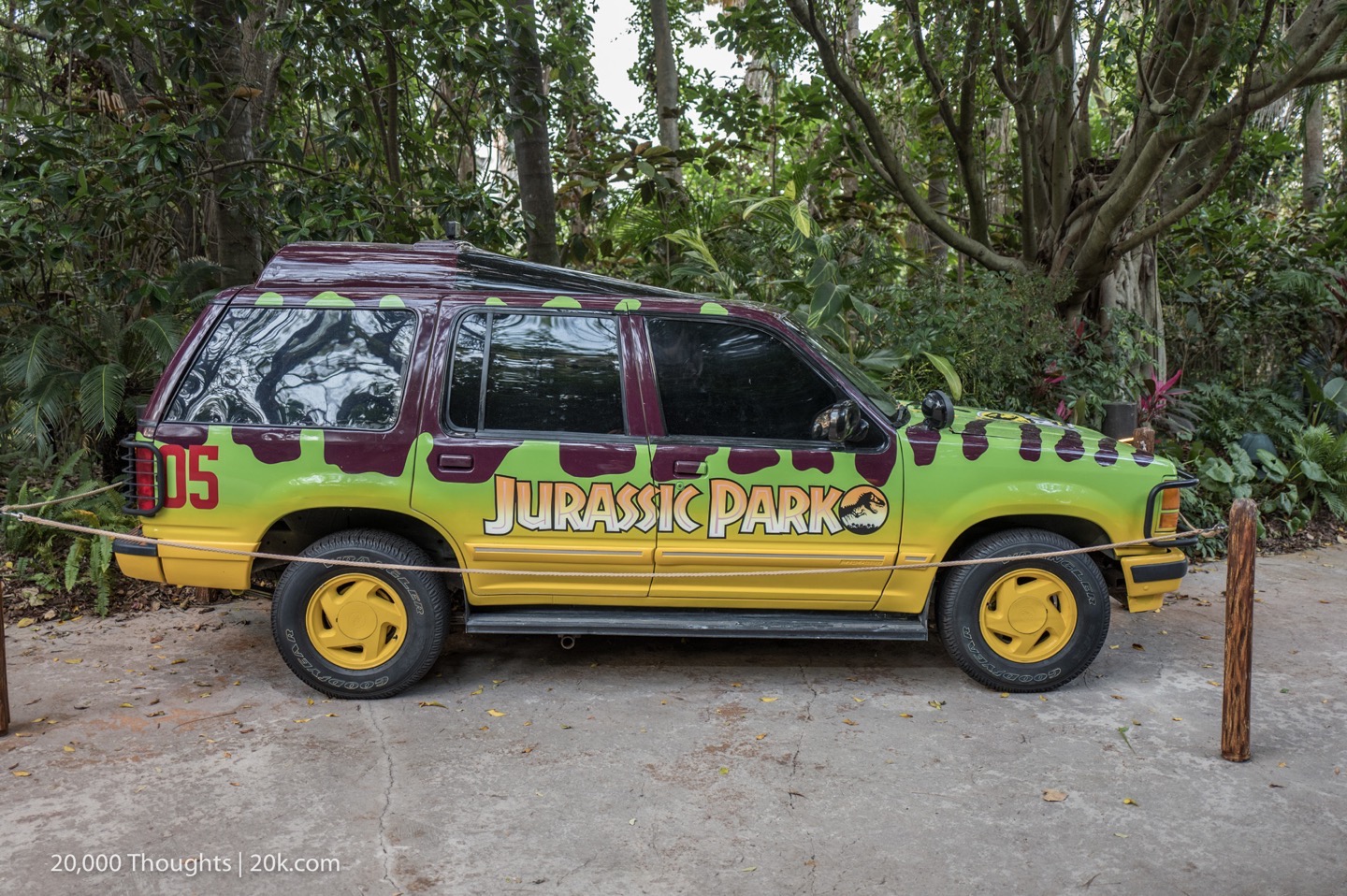 The bubble roof likely eventually succumbed to warping, discoloration, and leaking, and was replaced with a hastily formed sloping roof that did not match the the shape of the original. I speculate that this is because Universal theme parks (at the time owned by the Blackstone Group investment fund and NOT Universal itself) chose to not pay for the tooling or moulds used to make the roofs along with the SUVs themselves.

Another possibility is that the roof moulds simply didn’t exist anymore. In fact, this is more likely as why would a film production care about maintaining picture cars after production wrapped on the film? The process for making the roofs was simple, but the tools required were specialized. The roof in its current incarnation was very easy to make as it likely only required a heat gun or blowtorch and possibly only one piece of plywood cut to match the shape of the rear hump, a rectangle with the two top corners rounded. A flat sheet of plexiglass would be rested on top of that rear plywood shape, and then a heat gun would be used to heat and deform the plexiglass until it collapsed around the shape. This would be similar to the original curved bubble-shaped top, except that it would require a more complex structure underneath it, and would have been heated using a large industrial oven designed for this type of purpose, something that the shops at at Universal Orlando likely did not have or want to pay for.

From the looks of things, the replacement roof began to deteriorate as well, and I believe they filled it in (on the underside) with some sort of cement or filler, painted it black and permanently bonded it to the Explorer. If you tap it, it feels solid as a rock, not hollow at all. Additionally, the headliner inside the vehicle was replaced with a normal headliner, hiding any reinforcements or filler that might be inside, and also darkening the interior in addition to the blacked out side windows, seemingly to keep people from spotting would-be souvenirs.

The evolution of this vehicle is noticeable. It has probably been repainted twice over the years, and the color scheme is more muted than in the original film. I speculate that a darker maroon was chosen over the original bright red, in an attempt to offset fading from being parked in the sun year in and out. A decision was made to repaint the front bumper and strip (or paint black) the bumper trim, which was an oddly specific detail to pay attention to.

While in the movie, the vehicles rode on BF Goodrich tires, this one has had its tires swapped for Goodyears. They are likely filled with cement to prevent leaks or flats, much like mothballed airplanes.

The undercarriage shows a typical level of wear, tear, and corrosion from having lived most of its life in humid tropical climates (whether its beginnings on a car lot where it was damaged by a hail storm and deemed unsellable, and sold to the production), to its time in Hawaii on set, to its return to sound stages in Burbank  and being drenched by sprinklers simulating rain, to a nationwide tour on the auto show circuit, to a brief respite in the arid Los Angeles climate, and finally, out on display in 1998, at Universal’s Islands of Adventure Florida.

Many question the provenance of any such prop featured in a theme park (to be fair, most are replicas, even if presented as authentic). At the Universal Studios theme park in Osaka, Japan, they didn’t try particularly hard to convince people:

But they got the red right, and the bumper.

Getting back to Florida,  despite painting the windows black on the Florida Explorer, the paint budget apparently either didn’t stretch to the tailgate, or Universal decided this truck needed to remain drivable to move it around the park on its own versus casters, because you can see in, and you can see this (apologies for the bad photos) 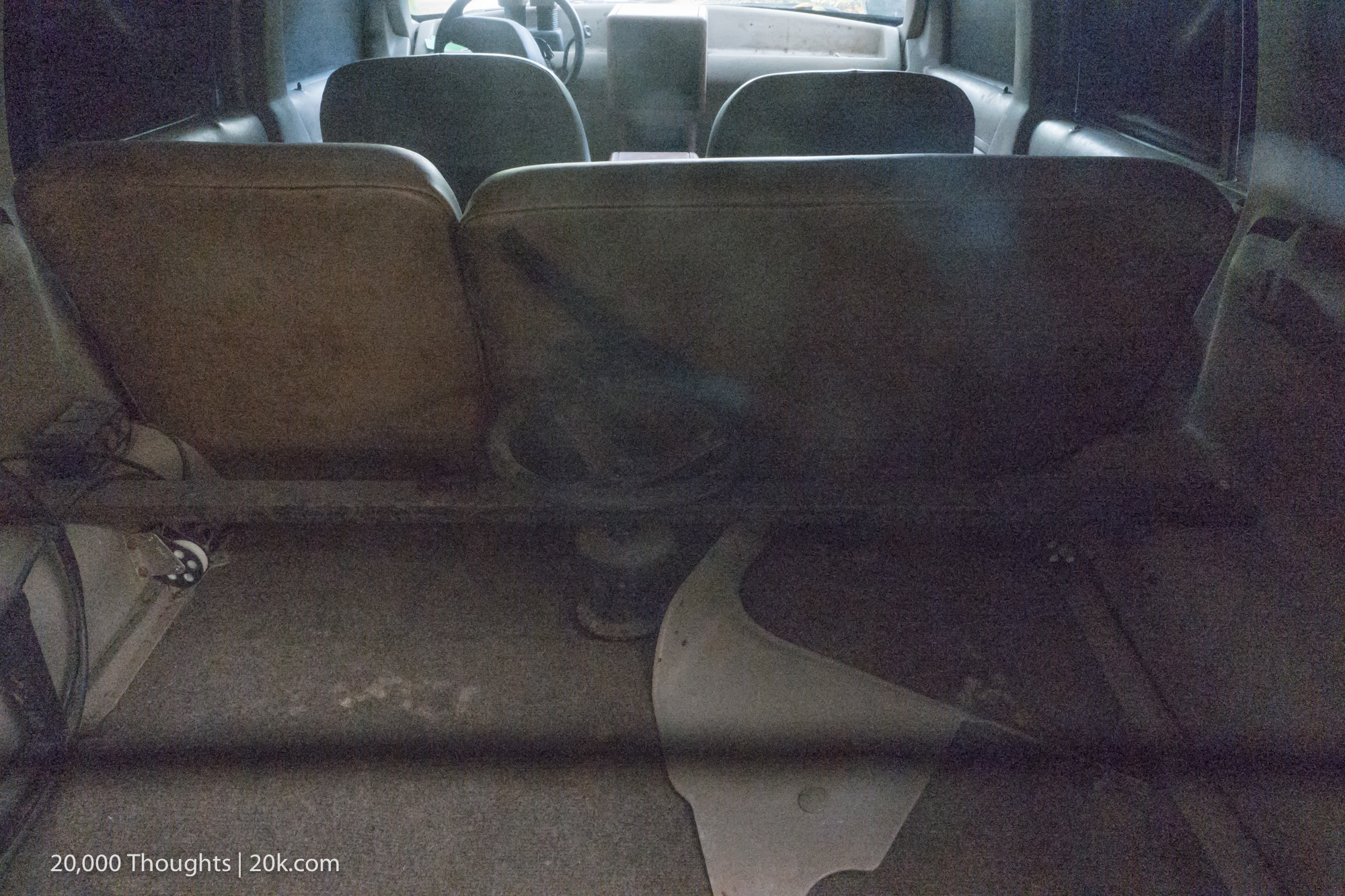 There are remnants of the blind drive system are still in there. That had to be exceptionally uncomfortable for the driver. In the film, you often see a hastily tossed cloth over the stunt driver. There appear to be cables on the left side that may have been for brake and throttle pedals, and I’m not sure what the torsion beam or the pulleys affixed to the wheel wells accomplished, but decision (or lack thereof) to allow a view into the Explorer was a good one as it ties this vehicle directly back to the great 1993 film.

If you’ve never seen it, I highly recommend it.